Not too long ago, a doorway appeared in the gym. A neon yellow paper sign was taped to the white plastic tarp that covered the opening. I never ventured over to read this sign because it was across the room and there were usually other people between it and myself. I tend not to socialize much during exercise time.

More recently, the neon yellow paper sign and the white tarp were taken down and people would occasionally walk in and out of this new, mysterious doorway. I still didn’t walk over to see what the doorway led to–because, you know, the risk of exercise time social interaction.

Last week, I started running (mostly pretty slowly and in intervals) on the treadmill. And can I just say–running on treadmills sucks. Of course, running in general is not my favorite, but the treadmill adds a little bit of extra suck.

Part of that may be residual fear of breaking a treadmill (which hasn’t happened yet), but there is also an element of not liking to have my speed dictated by a machine. Surely that’s the first step toward accepting robot overlords, and I’m just not ready for that. With the time change, though, trying to run outside in the evenings after work is kind of out of the question.

If only there were some place inside and not on a treadmill where I could do some interval-ed jogging for a little while every day.

Which brings me back to the new, mysterious, no-longer-tarped doorway.

I poked my head in yesterday and discovered this: 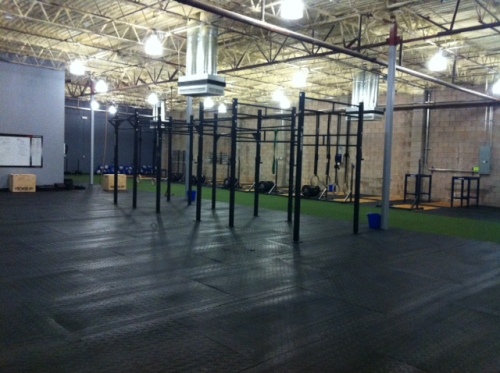 “Because it is a room that a person can only enter when they have real need of it. Sometimes it is there, and sometimes it is not, but when it appears, it is always equipped for the seeker’s needs.”
–Dobby (a free elf)

I may not have walked by three times, thinking about what I needed, but this isn’t Hogwarts and this Room of Requirement may work differently. I definitely feel like my brainpower might have helped this happen anyway. It may not be an indoor track, but it is a large room with a random piece of AstroTurf in the middle–sort of decent for some light jogging in one- to two-minute intervals.

And that’s what I did for the past two mornings this weekend. I see only two downsides to this system:

I probably couldn’t magic up a full track because I am no Hermione. Sigh…

It doesn’t matter. I still consider the materialization of this room to be definitive proof that I am not a Muggle.

Also, if we want to start Dumbledore’s Army, I totally know where we can meet.