But before I can adequately describe the experience, let me first explain my personal three-part aversion to running.

Okay, now that you understand my deep-seated anxiety, you’re probably wondering what in the world could have convinced me to give running another try. Well…

Maybe I’m just afraid of hitting a plateau. Or my friend told me a lot of things I should already know about stepping it up. Or I finally accepted that running is the inevitable next step, despite my (very well-justified) aversion. Or maybe I just wanted to know if I could do it.

I don’t totally know why, but Saturday morning, I found myself jogging for two-minute intervals on a very small mile-and-a-half route I mapped out. Here are the results:

So, running nearly killed my muscles, but it didn’t kill me (which was another very real concern no matter what anyone tells me)–that’s the sign of a good workout, right? I guess I should keep doing it or something. I guess, or whatever.

“From the cradle bars
Comes a beckoning voice.
It sends you spinning.
You have no choice.”
–Siouxsie and the Banshees, “Spellbound”

Oh, October. When the seasonal treats start popping up and stores start to stack boxes upon boxes of giant bags of various candy in themed packaging related to whatever holiday is closest.

And late one October afternoon, you decide to go to one of these stores to pick up some frozen egg rolls. You’ve been craving them and getting the frozen kind seems cheaper, though they end up not being as good as you would have hoped–but you won’t know that until later.

Unlucky for you, one of these stacked displays of assorted chocolate is between you and the register. As you approach, subpar frozen egg rolls in hand, you see that this stack has the good bags–with Reese’s cups AND Kit Kats AND Whoppers. The only way they could be better would be if they also had Almond Joys.

Without even bothering to slow down or give it a second thought, you grab one of the bags–probably because you know that second thought would point out what a terrible idea that purchase is. As you check out, you’re already telling yourself that it’ll be okay. You’ll just have one piece a day. Totally not a big deal.

But it never is just one piece, is it? Over the next week, one piece is more like one handful and you pay for your sins with a not-so-good weigh-in.

Brothers and sisters in the fight for better health, we must steel ourselves against this threat to our cause. We must band together to resist the devil’s food before that terrible and inevitable day when we wake from a chocolate-induced fugue on a bed of empty Hershey’s wrappers wondering where our lives went wrong.

It’s not too late my friends. It is not too late to leave the path leading to a witch who will stuff you with sweets and stick you in a stew. It’s not to late to walk into the sun and let the chocolate melt away behind you. There is glory to be found…

…just as soon as the rest of this bag of chocolate is gone.

***Said in my best preacher voice.

“You know you got the power
To make me weak inside.”
–Backstreet Boys, “Drowning”

I think we’ve covered this before, but I drink a lot of water–like a lot. In the last couple of months, I’ve even upped it to about ten 24-ounce bottles a day during the week (less on the weekends) because that’s the max you can enter into MyFitnessPal in a single day. It seemed like a good number.

The only side effect I really noticed was that my increased consumption of ice water seemed to be making me feel a bit colder (of course, that could also be due to the sub-zero temperatures in my office at work), and I asked people on Facebook if it was possible to give yourself hypothermia from the inside out. The general consensus was “no, and you might be crazy” (the second part felt implied)–but I started to wonder, is it possible to drink too much water? 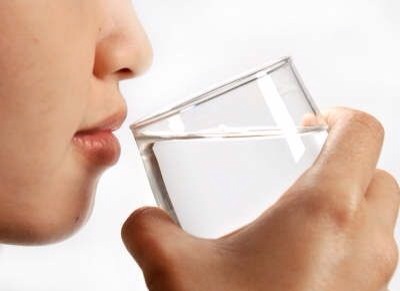 I’m sure you’ll be as excited as I was to discover that not only can you drink too much water, but it is TOTALLY POSSIBLE to kill yourself from it.

Basically, you can get water-wasted when you drink so much water that your blood becomes diluted, which can cause an electrolyte imbalance, which messes with your sodium levels, which can lead to a condition called hyponatremia, which can send you into a coma or a grave.

Good news: According to most of the articles I found (like this one and this one and this one), casualties are typically people in some sort of consumption contest and are purposely drinking tons of water in a short time, or they are marathoners/intense exercisers who drink too much too quickly for their bodies to replace electrolytes. There’s also torture, but we don’t talk about that.

So, you’re probably more likely actually drown than you are to die by diluted blood. I couldn’t find any actual numbers, but I’m assuming.

Bad news: Unfortunately, there is no hard and fast rule about how much water you’re supposed to have in a day. You just have to be careful and listen to your body, especially if you start to notice nausea, an altered mental state, vomiting, headaches, muscle weakness, etc. (according to those same articles) if you’re drinking a lot of water.

Hope you aren’t a hypochondriac…like me…

There comes a time during weight loss when your clothes stop fitting. The normal thing to do would probably be to get rid of/alter clothing at that point.

Totally reasonable–which is probably why I haven’t been doing that.

Here’s the weird thing I’ve found about how losing weight relates to fashion: There is a constant, nagging worry that you’ll slip, that you’ll lose all of you’re progress and need your old clothes again.

At least, I’ve found that I have that anxiety. I suppose I can’t really speak for everyone else. I just feel that there is a more than slight chance that I’ll go crazy and spend a month eating nothing but deep-fried pizza or something. (Does that even exist? Wait–don’t answer that.)

Instead of getting rid of/altering clothes, I tried the belt thing. As some of the waistbands have gotten a little bunchy, they’ve been relegated to a nebulous pile that I’ve been trying to ignore, completely convinced that I’ll be wearing it all again soon.

Then, one day, my friend expressed an inordinate amount of shock that I was wearing jeans that actually fit and I thought, Maybe I should reconsider some of my decisions.

So, the monthly challenge for October is to indiscriminately get rid of everything that doesn’t fit anymore. And, yes, I probably will need the whole month because there are some parts of my wardrobe that I still don’t want to lose. I’m looking at you, polka dot sweater.

No more clothes hoarding. If I can’t wear it, it goes.

And if you see me wearing something that is a bit too big this month, it’s probably because I’m saying goodbye. Don’t judge.

“If she wanna stay, she stays.
If she wanna go, she goes.
She doesn’t care how she gets there
Long as she gets somewhere she knows. ”
–Eric Hutchinson, “Rock ‘n Roll”

I don’t usually count the miles completed on the day I post here in my weekly mile total, but I am today because today I crossed/elliptical-ed mile 2,014 of the 2014 Mile Project—A FULL THREE MONTHS EARLY.

Not that I’m bragging or anything.

Guys, guys, please. You can stop applauding. It’s really not a big deal. Of course, I did celebrate by purchasing some boots online. (I’m completely determined to find tall boots that work for me. This is my second try–last time didn’t work out so well.)

Obviously, this isn’t the end. I mean, I’m kind of on a roll.

And that’s all for today.

I’ve gone over 2,000 miles in nine months–what more do you want from me?

My Tweets
The Mile Project
Blog at WordPress.com.
Loading Comments...