The surest way to send your week downhill pretty quick is to start it out on a high–like seeing Neil Gaiman on a Monday, for instance.

I speak from experience.

That’s right. Last Monday, a few friends and I attended the Emerson-Wier Liberal Arts Symposium at the University of Science and Arts of Oklahoma in Chickasha to see world-famous, award-winning writer Neil Gaiman. It was a rest day well spent.

Surprisingly, I found out about the event through my gym. When I saw the flyer in the window, I nearly had a heart attack. Neil Gaiman? In Oklahoma? FOR FREE? Sign me and three friends up.

His face was on our tickets!

Gaiman is responsible for giving the world Coraline, Stardust, Neverwhere (which I’m currently reading), American Gods, his famous “Make Good Art” speech, and so much more, including two episodes of Doctor Who. As someone raised in Chickasha, I can tell you that this type of thing does not happen often.

The month or so between ordering the tickets the tickets and attending the event was marked with much anticipation and coworker jealousy. Sometimes, I would silently squeal “NEIL GAIMAN” to myself and smile for what others probably thought was no reason.

The event was general admission, so my friends and I did have to wait in line for a bit, but it was a small price to pay. Before we entered, the staff passed out programs with question cards inside. If we so chose, we could write a question and he may or may not answer it later. I knew I wanted to ask something but had no idea what. He surely gets the same questions all the time. I mean, he’s Neil F-ing Gaiman.

Once the doors opened, I spent some time thinking about what to ask while continuing to chat with my friends. (It had been a long time since we’d all been in the same room, so some catching up was necessary.) At some point, I sort of mentally threw my hands in the air and wrote something down. Spoiler alert–he did not answer my question. NOW I’LL NEVER KNOW. 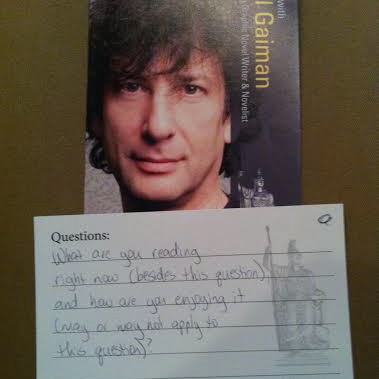 My question for Neil Gaiman: “What are you reading right now (besides this question), and how are you enjoying it (may or may not apply to this question)?”

Finally, a student came out and introduced Mr. Gaiman to the packed house, and he filled the auditorium with his distinguished British tones for an hour and a half. He talked about where writers get ideas, the lie of writer’s block (after all, gardeners don’t get gardener’s block), read two stories from A Calendar of Tales, talked about working with his dear friend and colleague Terry Pratchett (who unfortunately passed away a few days later), and answered questions about everything from how he met his wife to what missteps he’s made in his career. The biggest laugh line came when he picked up a card and read the question, “How does someone get an agent?”

He paused, looked up at the audience, and said something along the lines of, “Go to a place where agents gather and make a sound like an author.”

(I say “something along the lines of” because I, most unfortunately, do not have the auditory equivalent of a photographic memory. I’m getting older, people.)

He was everything you would expect a Neil Gaiman to be: wild-haired, engaging, thoughtful, insightful, funny, and just all-around awesome. Do I even need to say this? He’s Neil F-ing Gaiman.

In deep discussions about the event afterward and reading other bloggers’ accounts (such as Alyssa Grimley’s and Lex Selzler’s), I’ve discovered that different people were inspired by different aspects of the evening, whether it was hearing an author read his own work, hearing him assure amateurs that you should focus on making an interesting thing instead of getting a paycheck, or so many more things than I could possibly say here.

What struck me most was how much Mr. Gaiman is a storyteller to his very core. He took every opportunity to give us a full picture of every little detail of whatever he was discussing. When talking about how he got involved with Doctor Who, he launched into a scary-accurate impression of Steven Moffat. When talking about getting his start in journalism and lying about what publications he’d written for, he told us that he made sure to go back and write for each and every one of them so that he wouldn’t be a liar–just a bit chronologically inaccurate. He could have so easily answered any question with a sentence or two, but he took the time to give each his full attention and the Neil Gaiman treatment. He took the time to tell each story.

And that’s what was inspiring to me.

After I got home, I felt the need to somehow tell Mr. Gaiman how amazing it was for him to come to Chickentown (I’m from there–I’m allowed to call it that) and that he should come back soon and often, so I did the only thing I could think to do: I tweeted him.

And then this happened. 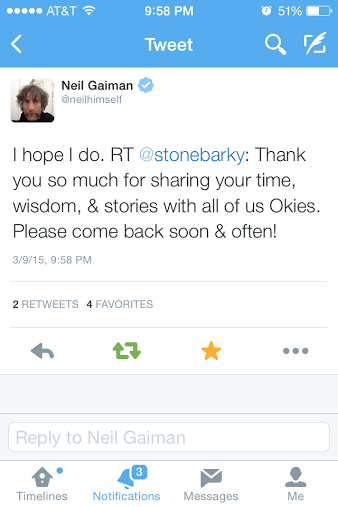 I’m @stonebarky, in case you were wondering.

I hope you do, too, Mr. Gaiman. Or may I call you Neil now, since we’re Twitter best friends?

A couple of weeks ago, I tried to get some advice about how to celebrate when I finally hit the fifty pound mark. Since I got exactly zero suggestions, I reverted to one of my default methods of rewarding myself: buying books.

No, I didn’t mark the day with an epic cheat day in which I downed a dozen cupcakes or with a huge shopping trip during which I splurge on a new wardrobe. I rewarded myself with a couple of new books. Specifically, I invested in some reference books about writing.

I am now the proud owner of The Emotion Thesaurus, The Positive Trait Thesaurus, and The Negative Trait Thesaurus. All three are by Angela Ackerman and Becca Puglisi, promise to help writers figure out characters, and are highly recommended on Amazon. I’m thinking they’re really going to help me finish this freaking novel.

Just a couple of new thesauruses–or is it thesauri?

Maybe I’ll celebrate finishing the novel by consuming a tub of ice cream. You know, whenever that day comes.

I’d probably vomit, though, so that may be a bad idea. I’ll just figure it out when I get there.